My experience at Canaveral National Seashore was quite the adventure – and I mean that in the run for your life and cover your eyes kind of way, not the in the arms held high at the top of a mountain way.

Needless to say, it was still a good experience with just a few speed bumps/ spider webs/ naked old men. And if you want to avoid that last part, I advise making sure you know which side of the park you want to end up on. Canaveral is over 58,000 acres, or so they say, and you don’t want to end up accidentally stumbling onto a nude beach with your tennis shoes on and a backpack full of hiking gear. Because it can happen, trust me.

However, if you’re lucky like me you might just meet a nice enough park ranger that will tell you exactly where the trails are, right after looking at you like you’re crazy for being on the complete wrong end of the park.

Fortunately, it actually worked out well, because on the way to the north end of Canaveral, me and my older brother found a pretty awesome manatee observation center. Which ended up being the absolute highlight of the entire day. Personally, it has been so long sense I had last seen manatees and all their mighty fat that I forgot just how incredible these beasts really are. They are truly massive at about 8 feet, yet possibly as peaceful as your favorite night time cuddle buddy. Which might not seem very captivating, but just imagine cuddling with an 8-foot sea monster. Okay, I probably wouldn’t cuddle with them either, but there are still pretty cool.

After we finally finished the drive up to the other end of the park, the first hike we did was the turtle mound trail, which we quickly found out wasn’t actually much of a trail. It did however, offer some pretty cool views of the ocean and mosquito lagoon. They would have been amazing but I felt like both ways we looked, our view was quite obstructed by man-made creations, something I can’t stand to look at side by side with natures beauties.

We made a quick stop at the beach which was honestly gorgeous and almost desolate in terms of the amount of people that populated it. Let’s just say the north side of Canaveral National Seashore has a much better beach than the south side, and it showcases much more clothing among those who occupy it. Which despite popular belief, is definitely a plus.

The last stop on our quest through Canaveral’s beachy swamp, was the Eldora trail. 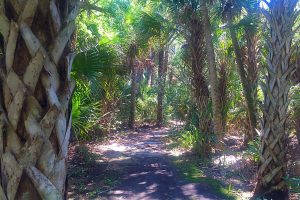 “WARNING: this trail may contain a billion spiders” would have been an appropriate sign, we however, got no such warning — and so we ventured on unknowingly.

At first the trail seemed pretty innocent, and was actually quite the spectacle as the trees and shrubbery made for a pretty unique trail. It wasn’t long though, until we discovered why we were the only people parked at the trailhead.

There were Banana Spiders lining the entire trail! I mean, if you enjoy cutting down the webs of these 8 legged 2-3 inches every 2 steps then you would absolutely love this trail. But, if you’re like me and you don’t particularly enjoy seeing giant spiders in every direction at all times, then I recommend you avoid Eldora. Unless you own a flamethrower. In which case, you should still probably avoid it because you might end up burning down the entire trail.

Overall this park was pretty stunning and the beach was beautiful. If it weren’t for a couple of avoidable factors along my journey, I would probably rate it higher but for now, I give it a 6/10 on the quest meter.